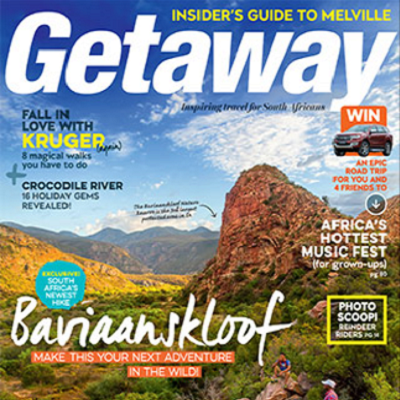 This article is full of humour and grit as the Getaway team come to grips with the heat and beauty of the Leopard Trail.  We love it when the writing matches the landscape – beautiful, truthful and crafted through years of hard work.

“And finally I’m standing on top of the world, incredulous at what I’ve achieved, and marvelling at the exquisite, untouched world around me, while a pair of eagles soars close by, judging life and death below. I think to myself, I’ve walked through a story about the land, the people, the creatures, the heartbreak they’ve all faced, the hope and philosophy and exquisite landscape. And then I turn and take one step, and then another step and then another…”

Here are the introductory paragraphs, and we suggest you read the rest yourself at the link below:

“The Baviaanskloof is known for its hoards of baboons. It is, in fact, what Baviaanskloof means: the valley of baboons. These four-legged rascals are splendidly adapted to this phalanx of bony orange rocks that jut out into the vivid blue sky. But in four days we see only one – even baboons have the sense to exert as little energy as possible here at midday in the height of summer. Not us, though. No. It’s day one, 2pm, and there we are, trudging up a deeply rutted stony former truck track, and with each crest another appears, higher, longer – endless. It doesn’t take long to sift the wheat from the chaff, and the chaff is me and an Irishman in his seventies who has walked the entire Camino de Santiago, but is now off to one side making an alarming wheezing sound. My own face is puce, my head throbs and I’m so overheated I want to throw up. Whose idea was this?

Linden Booth is strolling in front of me, chatting comfortably, cool as a Bishop’s old boy at a polo match. It was his idea to buy a farm in the furthest corner of the Baviaanskloof. His idea to create this murderous hike. His idea to leave at 2pm, when the sun is at its most vicious. His idea to tell us we would be just fine, I would be fine. But I’m so not fine. I’m doubled over, with barely the presence of mind to twist open my Stanley flask and pour out some iced mint water that I sip at like I’m on my deathbed – any kind of bed will do at this point. I’m an atheist, but this could be the turning point. I send up a prayer, then remember that I have blasphemed up every inch of this God-damned track; I’m going to hell! Except this already feels like Satan’s domain.”

Read about all the trail and Sonya’s experience in Why You Should Walk the Baviaanskloof’s Leopard Trail.