Recovery well on the way after the fires 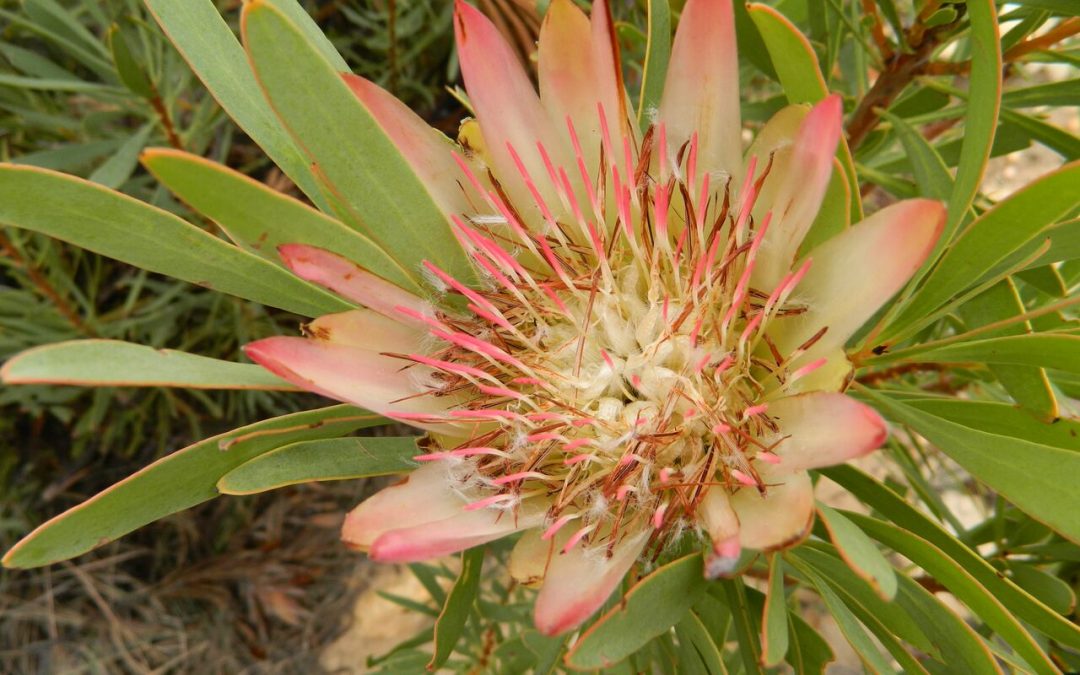 As most of our friends know, a mountain fire swept through our section of the Baviaanskloof in December. As sad as it was to see the land burnt and as wonderful as it is to watch the veld recover, we must accept that fires here are a natural phenomenon, and an important ecological process in the fynbos ecosystem.

It is the magic and beauty of this ecosystem and landscape that makes the Leopard Trail such an iconic trail in South Africa, and we accept that fires of this nature are a part of our operating environment.

For some insight to the recovery of fynbos, here’s a timeline from the desk of the ecologist at The Eastern Cape Parks and Tourism Agency:

“Fire is normal in fynbos systems and many plant species require fire. It is the most important natural disturbance in fynbos biomes. Fire provides an opportunity for seedling establishment – most recruitment of seedlings in fynbos happens in response to a fire.  As fynbos vegetation ages, there is a decline in diversity as the vegetation becomes tall and some species are shaded out. Fire is therefore required to maintain diversity.

“The response of fynbos vegetation to fire is complex. Plants have various fire survival strategies, principally divided into two groups: resprouting plants and reseeding plants. Resprouting plants often have insulating mechanisms to allow them to survive fire (for example, Protea nitida has thick bark on its stems that insulates buds from fire damage. Resprouters include plants that resprout from fire-resistant rootstocks, such as the grasses and species such from the Proteaceae (Leucadendron salignum, Protea cynaroides), Restionaceae (reeds) and Cyperaceae (sedge) families.

“After a fire, the vegetation will move through various stages until reaching its climax structure and composition – this is known as post-fire succession.

“Early stages are characterised by a high cover of grasses, the emergence of post-fire ephemerals and also flowering of geophytes. Resprouting of perennial shrubs occurs very quickly after the fire (within two weeks). With all the new growth, the veld looks very green. The rejuvenation of grasses after a fire is very important for the grazing mammals inhabiting mountain fynbos (such as Cape mountain zebra and red hartebeest).

“Fire stimulates flowering in certain species, especially in geophytes (plants with underground bulbs or tubers). This is largely due to the indirect effects of fire, such as changes in soil temperature and nutrient availability. In the Baviaanskloof, species that can be found flowering in response to a fire include Watsonia knysnana, W. schlecteri and W. wilmaniae, Boophane disticha, Brunsvigia josephinae, Cyrtanthus montanus, Haemanthus coccineus, Haemanthus sanguineus, Nerine humilis, Disa pillansii, D. porrecta and D. cornuta, Satyrium acuminatum and S. bicorne.

“Fire ephemerals are short-lived species that complete their life cycles in the period immediately after a fire. Germination is stimulated by fire. Species include Ursinia paleacea, Aspalathus spp., Thesium strictum and T. virgatum.

Some reseeding Erica species appear to have a delayed germination after fire and only appear after more than a year after a fire.

The reseeding Proteaceae are generally the slowest to mature and have long juvenile periods. For example, Protea neriifolia, P. mundii and P. repens take at least four years (often longer) to begin flowering in the Baviaanskloof.”

You can also an idea from this site: http://www.fynboshub.co.za/fynbos-diversity/when-the-smoke-settles-new-life-begins/

ABOVE: A little protea snapped on The Leopard Trail by Kobus Conradie in April 2017